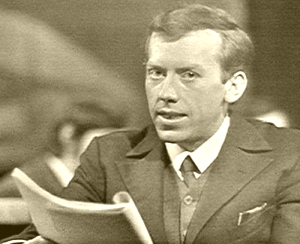 Maybe he isn’t so known, but everybody in this area known his songs.

He was born in Jule 20, 1941 in Prague. His colleges said everytime he was very civil-spoken and sensible person, not able to vulgar communication or curses.
Already as small child he started to learn to play on instruments, especially on piano. In the school he played on guitar. It’s interesting he had able to play almost on any musical instrument. During study period, he conducted school orchestra and ahead of school-leaving exam he presented himself in some amateurish group. He played there on trombone and contrabass.
During study on University (Architectural Faculty – 1958-62) he was song writer and composer, record as actor and singer in Karkulce (Karlín kultural cabaret), later in clubs Olympic and Sluníčko.
From 1962 he was engaged in Plzeň, later in Army Art Group. Here he met his future’s college Miloslav Šimek and they created never to be forgotten autor and actor duet.
Suchý a Šlitr engage them in SEMAFOR. Success brought their presentation humor scripts. All program consistent of scripts and songs of Naďa Urbánková, Věra Křesadlová, Miluše Voborníková, Pavel Bobek, Jiří Helekal, Jozef Laufer etc.
He sang many classic songs, for example Gimmi Det Ding (Gimmi Det Ding), Pupákova píseň lásky (Pupak’s love song) with Miluše Voborníková, Drahý můj (Dear John) with Naďa Urbánková, José (Jose), Vzdálené bubny (The Distant Drums), Jako kotě si příst(Too Many Chiefs Not Enough Indians), Blizard (Blizzard), Své banjo odhazuji v dál (I Throw My Banjo Away), Oh, Ruby, nechtěj mi lásku brát (Ruby, Don’t Take Your Love To Town), Skála (We Shall Not Be Moved), Svatební průvod (Does Your Chewing Gum Lose It’s Flavor (On The Bedpost Over Night)), Má dívka N (Ann), Houston (Houston), Čekej tiše (He’ll Have To Go), Ano, pane Jiří (Yes, Mr. Peters), Vzdálené bubny (The Distant Drums), Závidím (I Yellow; Il ragazzo della Via Gluck) etc.
His life was unfortunately very soon finished malign decease (Hodgkin’s lymphoma) in December 5, 1971 (exactly 2 years later as Jiří Šlitr).
On funeral many people came to say Good Bye to him. Singer Naďa Urbánková sang his song Závidím (Grossmann mummy ask her for it). This song was written by Jiří Grossmann when he had already known his end is coming. The part of this song is in his gravestone: „Vždyť já chci jen žít, jak žít se má …“ (Well, I only want to live, live as to be}.

Today, there is remind of his memory one Prague theatre on Václav square and one Prague passage. This name was got by Miloslav Šimek, who continue with Luďek Sobota and later with Jiří Krampol, unfortunately without Grossmann nobleness.

His deathlessnes insure mainly by his great short story and shows with Miloslav Šimek. These stories came folk and sometime we forget that he was famous song writer.
He played in some films (Crime in a Music Hall, Visiting Day of Miloslav Simek and Jiri Grossmann, Visiting Day No.2-6).