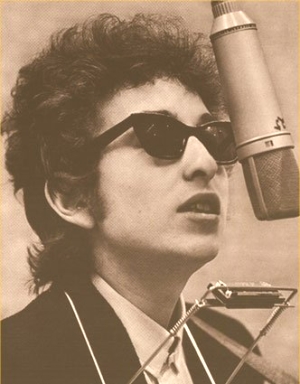 In 1961 he leaved this town and went to New York and visited the musical icon Woody Guthrie, who was in hospital in New Jersey. The days of life of Woody were going to finish. Woody was great inspiration for Bob. Such as later Dylan said “You could listen to his songs and actually learn how to live.” In hospital Dylan met Ramblin’ Jack Elliott and they became friends.

During year, Bob played at various clubs; in July he presented himself in radio, in program “Saturday of Folk Music”. He got public recognition when The New York Times published positive review by critic Robert Shelton. In September, he was invited by folk singer Carolyn Hester to play on harmonica on her album. This helped Dylan to sing contract with Columbia Records (John Hammond from that recording company listened him during recording Hester’s album).

In 1962 Dylan recorded album Bob Dylan. There were folk, blues, gospel and also own songs. Maybe that does why he was unknown interpret; the album had little impact (only 5000 copies were sold). Columbia wanted to finish the contract, but Hammond and Johnny Cash ranged oneself with Bob. The contract continued and Bob recorded many songs. Someone of them was recorded under pseudonym Blind Boy Grunt.

In 1962 he changed his name to Robert Dylan and signed contract with Albert Grossman, who was his manager to 1970.

The second album was recorded in 1963, its name was The Freewheeling’ Bob Dylan. Bob presented himself as singer and songwriter. Many songs from this album were protest songs, the most famous was Blowin’in the Wind. Apropos, this album inspired also The Beatles.
Other famous songs from that album were A Hard Rain’s a-Gonna Fall and Lord Randall. Dylan had been introduced as singer with accompanied acoustic guitar.

Bob didn’t train his voice and his voice had unusual sound, it was that why he was different from other singers.

He met Joan Baez, who became his lover and advocate. She helped him with career. Some other interprets (The Turtles, The Byrds, The Hollies, etc.) singed and recorded his songs, but nobody coudn’t sing his songs like himself.

In 1963 he engaged in civil rights movement, he sing at rallies, he presented on BBC television. In the same year he had conflict with media: He recorded new album, The Times They Are a-Changin’ (famous songs were Ballad of Hollis Brown, North Country Blues, Boots of Spanish Leather, One Too Many Mornings, Brechtian, The Lonesome Death of Hattie Carrol, etc.).

Next album (Another Side of Bob Dylan) was already next year. In this album you can feel rock and roll came to dominate in his music. He moved from folk scene to rock and roll. Also he changed his look and wardrobe.

Year 1965 was very rich on his activities: He started to use electric guitar. He recorded album Bringing It All Back Home, single Subterranean Homesick Blues, music video Don’t Look Back. He went to tour in England, recorded album B side, with maybe one of the most known song Mr. Tambourine Man, he had controversial presentation in Newport, other single (Like a Rolling Stone – got No 2 in US and No 4 in UK charts).

In 1966 Dylan agreed to record in Nashville (also Nashville is name of the city. Who doesn’t know, Nashville is like Mecca of country music). Here had met great sessions, which produced the album Blonde on Blonde.

Many critics say three albums from 60’s (Bringing It All Back Home, Highway 61 Revisited and Blonde on Blonde) were great cultural achievements of that century.

Year 1965 was successful not only in Dylan’s professional life, but also in private. He married Sara Lownds.

Next year he traveled on world tour in Europe and Australia, when every his shows consisted of two parts – in the first he singed and played on acoustic guitar and harmonica, in the second backed by band The Hawks he singed and played high voltage electric music.
In this year, his first child Jesse Byron Dylan was born.

After tour he returned to US, especially to New York. The pressures on him increased, his manager had to prepared schedule of new concert tour, his publisher waited for his manuscript of novel. This period was hard for him, accordingly he had motorcycle crash and he broke several vertebrae in his neck. This accident showed him, what is important in his life and got change to leave that pressures for 18 months.

During this time he resumed his work, he started to edit his film from his tour in 1966, recorded with The Hawks many of his old and new songs. Many of these songs were compiled in five CD The Genuine Basement Tapes.

The Hawks renamed to The Band and recorded independent album Music from Big Pink and started their own successful career.

In October 1967 Bob Dylan returned to Nashville and recorded his first album after motorcycle accident. The name was John Wesley Harding.