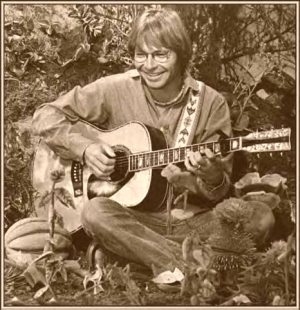 In 1969 he started his solo career and recorded his first album named Rhymes and Reasons in RCA Records (recording studio). The album hasn’t huge success, but one song from this album became a number one in the same year. It was song Leaving On A Jet Plane.

In the next year he realised two albums, named Whose Garden Was This? and Take Me To Tomorrow. Although these albums were not as successful as those that followed, they would all be certified gold by the RIAA, and would later be considered some of his best work.

Next year and new album. It was Poem, Prayers and Promised. There was the famous hit and country anthem Take Me Home, Country Roads. From that time, Johny’s career grew up and brought hit by hit.

Why was he so succesful? What was the key of his popularity? They were many appearances on TV shows. His look with long blond hairs, western shirts with ornaments, etc, it was new image and made him very photogenic person – pop star. Denver made his own show, music special named Rocky Mountain Christmas. This show was watched by many millions people. Live concert An Evening With John Denver won the Emmy. From Muppet Show where John was many times visitor, there began the friendship with Jim Henson.

In 1977 John tried his historionic career in the movie Oh, God!. Year 1975 brought award to him (Country Music Associoation).

John Denver developed not only his singer’s career, but started also wiht charity. In 1977 he co-founded The Hunger Project (“It is non-profit charitable organization incorporated in the state of California. The Hunger Project describes itself as committed to the sustainable end of world hunger. In thirteen countries in Africa, Asia and Latin America, the organization claims it implements programs that mobilize rural grassroots communities to achieve sustainable progress in health, education, nutrition and family income.” More information – Wikipedia) and cooperated with this organization until his death. He made song with this theme, named I Want To Live. John Denver also cooperated with UNICEF (“United Nations International Children’s Emergency Fund, which was created on December 11, 1946 to provide emergency food and healthcare to children in countries that had been devastated by World War II. Its programs emphasize developing community-level services to promote the health and well-being of children.” More information – Wikipedia).

In 1982 John changed his image – he cut his long hair, he left the glassed and chose contact lenses, he started to work to promote political ideas. He promoted campain of Jimmy Carter. He symphatized with Democratic Party. During 1980’s he critized Reagan Administration and also American Conservatism and Congress. From this period became folk rock ballad Let Us Begin (What Are We Making Weapons For), The Ballad of Richard Nixon, The Ballad of Spiro Agnew.

Leaving on a Jet Plane