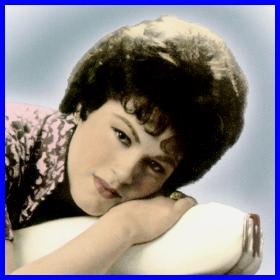 Black day came on March 5, 1963. She returned from benefit show, which was at the Soldiers and Sailors Memorial Hall, Kansas City, Kansas. Her last song in this show was I’ll Sail My Ship Alone. It’s irony of destiny, that Dottie West invited her to returned back with her and her husband Bill by car. But Patsy wanted to be asap with her children and that why she used airplane. It was in forest near town Camden in Tennessee, the airplane crashed at 6:20 p.m., only 90 miles from the Nashville.

Patsy Cline died in her 30 old. There were also Hawkshaw Hawkins and Cowboy Copas. There were no survivors. Loretta Lynn, her very good friend came to know this horrible message in the morning from radio. It was great loss for all Country World.

Patsy Cline was buried in her hometown of Winchester, Virginia, at Shenandoah Memorial Park. In the forest near Camden there was erected the bell tower to the memories of Patsy with help of Loretta Lynn and Dottie West. The bell plays hymns daily at 6:00 pm, the hour when her death. Many item, which were found in the place of airplane crash, were donated to The Country Music Hall of Fame.

After death the sale of the records didn’t stop. Singles of Sweet Dreams of You, Leavin’ On Your Mind and Faded Love came the greatest hits of 1963, the songs When You Need a Laugh and He Called Me Baby in 1964 and song Anytime in year 1969.

Patsy had inspired many country singers, such as Loretta Lynn, Reby McEntir, Sylvie. Loretta Lynn did homage to Patsy by her album I Remember Patsy in 1977.

In 1973 Patsy was elected to The Country Music Hall of Fame. In 1985 there was produced the movie about her life, named Sweet Dreams: The Life and Times of Patsy Cline by HBO/Tri Star Pictures.

Discography:
During her live were released these albums:
1957 Patsy Cline
1961 Patsy Cline Showcase
1962 Sentimentally Yours

How Can I Face Tomorrow

A Bottle Of Wine and Patsy Cline

Pick Me Up On Your Way Down