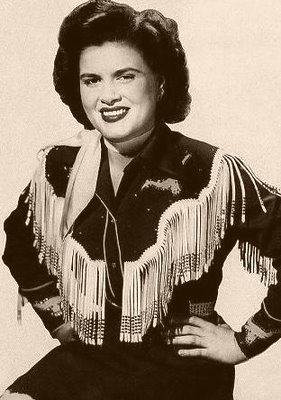 In Decca Records Patsy started to cooperate with famous director Owen Bradley, who was responsible for success also other country singers – Loretta Lynn and Brenda Lee.

The most successful record in Decca was ballad I Fall To Pieces. The song had in the top of two charts – country and pop. It could tell you, it was also the most famous song of Patsy Cline. It was written by Hank Cochran and Harlan Howard. The other famous songs were Crazy, Who Can O Count On?, She Got You, Strange and When I Get Through With You.

The dream of Patsy was to sing in Grand Ole Opry, and this dream came the true in 1961. Patsy Cline became the greatest star of it.

“Even when she didn’t have it, she’d spend it — and not always on herself. She’d give anyone the skirt off her backside if they needed it.”

and singer George Riddle said of her:

“It wasn’t unusual for her to sit down and have a beer and tell a joke. She’d never be offended at the guys’ jokes, because most of the time she’d tell a joke better than you! Patsy was full of life, as I remember”

The year 1961 wasn’t only happy of her. She had very dangerous car accident (the second) in Nashville and she was near of death. She spent on month in hospital. She received many greetings and flowers from her fans. After leaving the hospital, she had many marks of accident in her face. But she didn’t lose fans.
The friend Loretta Lynn sang Patsy Cline’s hit Crazy and got standing ovations. This song was during the Top 10 in three different charts (Hot Country Songs list – No. 2, the US Hot 100 list – No. 9, the Adult Contemporary list – also No. 2).

Patsy Cline was the pioneer in record industry, who showed the female could surpass the men in record sale and tickets of concerts. She opened the door for the other singers such as Lynn Anderson, Crystal Gayle, Reba McEntire, Faith Hill, LeAnn Rimes, Shania Twain and Carrie Underwood.

I Fall To Pieces