Heavenly sound from the Grand Ole Opry I – Patsy Cline 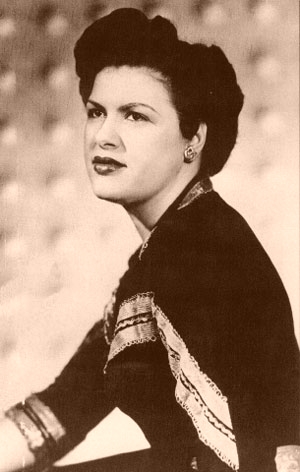 She was famous but also maximum schlemiel.

I’d like to introduce Patsy Cline, American country music singer, She was born in September 8, 1932, in Winchester in state Virginia as Virginia Patterson Hensley.

Her career started very early. As 4 years old girl, she won amateurish tap-dancing competition. Later she started to learn to play on piano and to sing in church with her mother. Patsy as small girl decided to be famous singer.

She went to radio and asked to sing in radio show there. DJ Jimmy McCoy agreed and new talent was on the world. Her ascent wasn’t finished, it was only beginning. In 1948 she won trip to Nashville, where Patsy presented herself in some clubs. After that, she returned home.

In 1953 she married with Gerald Cline. This marriage was short, only 4 years. The second man in her life was Bill Peer, who gave her name Patsy. But he wasn’t her husband. It was Charlie Dick.

Patsy became on Connie B. Gay’s Town and Country television show and also had appearances in Grand Ole Opry.

In 1955 she singed the contract with Four Star Records and recorded song A Church, A Courtroom & Then Good-Bye. During years 1955 and 1957 she released more materials in honky tonk style, but without big success. The Record’s producer had insisted Patsy would record in country style and during contract with Four Star Records she released 51 songs.

Great moment of Patsy’s career came in 1957. She met Charlie Dick , the love of her life. And also she won talent competition – Arthur Godfrey’s Talent Scout and was invited to show again. She sang song Walkin’ After Midnight, which became hit in country and also pop charts. This song was also in her the first album Patsy Cline. The song was written by Don Hecht and Alan Block and she didn’t like it. But the song had success and she decided to recorded it as single.

In 1958 Patsy and Charlie moved to Nashville in Tennessee (after the birth of the third child – daughter Julie).

In 1960 the contract with Four Star Records finished and she decided to sing new with Decca Records-Nashville. She also started cooperation with Randy Hughes, who became her manager. Her career started to grow up to the top.

A Poor Man’s Roses (Or a Rich Man’s Gold