Few day ago I watch one movie about life of famous country singer, Loretta Lynn. The name of that was Coal Miner’s Daughter.

She was born in small village Butcher Hollow in Kentucky, April 14, 1934 to family of coal miner Melvin “Ted” Webb and his wife Clara Marie (Ramey) Webb. Her own name was Loretta Young. She was the second of eight children. She grew up in same village. Maybe somebody didn’t know, she is also from one side Indian, because her mother was of Scots-Irish and Cherokee ancestry.

She was married in January 10, 1948 to Oliver Vanetta Lynn, who was known as “Doolittle,” “Doo,”. Yes, you see right. Only in her 13 years old. Very young. Her husband had to promise to her father two things: 1., he has never beat her, 2., he has never taken Loretta far away from her family house.

The wedding day was very poor, only few people. She hadn’t any experiences of married life and houses works, as she said she was uneducated. Doo worked, she was housewife. But without any knowledges of cooking, of housekeeping. Maybe that’s why Doo was angry with her and bagged he. She returned home, to parent’s house. In that time she was pregnant but she didn’t know it.

Doo decided to leave Kentucky and went to Washington. When he got to know about pregnant we changed decision and stayed with Loretta in Butcher Hollow. To her 17 years old, she had already 4 children (Betty Sue, Ernest Ray, Jack Benny, Doo – I hope I write right). In 1951 they left to Custer, Washington. There she was full time mother.

She started to sing as child in church, but after wedding she stopped it. Again she started to sing from her children and around their house. Doo liked it and that’s why he bought her guitar, although she wasn’t able to play on it. Loretta learned to play during cooking, during many house works.

One day Doo invited her to pub and there she began singing in local club – Grace Hall. The first embarrassment went away and Loretta had great success. From that time she sang more time but Doo had other plans. Next step was recording single named I’m A Honky Tonk Girl and Doo sent it with her photo to many radios.

It looks her life is on right way, and suddenly hard blow, her father died (1959). Loretta taxed herself with her leaving to Washington.

New plans – open her sing career. Her children stayed with grand mother in Kentucky and Loretta with Doo started to visit all radios, where they sent her single. They took Regional Record Reports and started. The first step was to play her song. In radio they wasn’t put it, but Loretta was relentless and it was well. 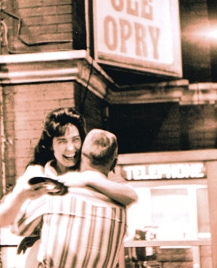 The brake point came when she got 14 of full-state hitparade. In that time Doo decided the time is right to come out in Grand Ole Opry. Loretta had never hoped to be there, but it was in Ernest Tubb show. In white hat and in own sewn dress, Loretta was light point of this show. Step by step her fame was growing up and she was in Tubb’s show next week again.

One day she sang song especially for Patsy Cline, who had car accident. Patsy’s husband Charlie Dick invite Loretta to Patsy’s room in hospital where she was. Both women found affinity and the friendship started. Loretta went with Patsy on Patsy’s tour. Doo went with them.

Loretta became famous, her husband started to go back and it wasn’t what he wanted. He drunk, to be aggressive.He still love her and that’s why he made decision – Loretta continued in tour, he went home.

Loretta is pregnant again. Patsy make plans but she died during returning from benefit concert(at the Soldiers and Sailors Memorial Hall, Kansas City, Kansas) at plane crash in March 5, 1963 near Camden, Tennessee. Patsy Cline was 30 years old. Loretta was broken-hearted.

The pregnant was ended by childbirth of twin girls. As soon as possible she returned to concert’s activity.

Again she was busy, she traveled on tours, recorded albums, showed on concerts. She became the most favourite country singer, especially The first Country Lady.

The concerts were very strenuous, Loretta slept more in bus as in normal bed in house and she started to have headache. She have taken medicaments, more and more. Tempo is hard, on next tour Lorette was traveled with her husband Doo, but problems of her health has deepen. She didn’t remember song words, she is run-down and in the end she flaked out direct on podium.

Later she spent time on their Ranch with her husband and her children. Doo decided to build new house.

The free time was very important for her, she returned to the light of reflector, with new vitality, with new songs.

During the movie, I thought: Yes, it was very long time ago, it was normal, it was in 19-teen century. It can happened only in that time. And after movie? Stop, it was in 20-teen. Loretta is still the first country lady. And she is good example that when man wants something and work on himself, he can have success. REMEMBER IT. 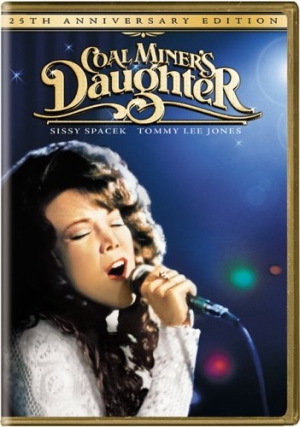 4 Responses to Loretta Lynn – part I