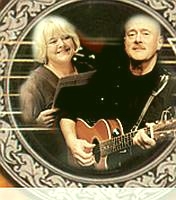 This band is legend of the folk music in Slovakia and Czech. The head protagonists are siblings – brother and sister (Peter and Hana Ulrych).

Peter Ulrych
He was born in February 21, 1944 in Hradec Králové (Czech).After high school he studied air engineering on Military Academy. But he had never worked in this line of business. Immediately after graduation he became professional music player. During study he teach playing on piano, two years he studied music composition and play on contrabass.
In 1961 he co-founded Divadlo bez hraníc (Theater without boundaries).
In 1964 he came to rock band Vulkan and in 1967 to band Atlantis. There came also his sister Hana. With this band, they performed in theater Rokoko, in show Nepůjdem do kláštera. The greatest hit was song Nechoď do kláštera.
Peter had tend to tacking folk and rock and this synthesis has been manifest during next years.
In 1974 the band recorded album Nikola šuhaj loupežník. This successful album showed them their way in the future. Morava folk and public songs are the main repertory of the music band Javory. Peter is the manager, song writer and composer in the same person of this band.

Hana Ulrych
She was born in March 31, 1949 in Liberec (Czech). From her youth she liked to sing. That’s she was member of children choruses. With his brother Peter, she established Divadlo bez hraníc (Theater without boundaries). In 1964 she came to band Vulkan and after 3 years (1967) to Atlantis. She also performed with band Bluesmeni(Bluesmen).
From 1968 she had solo career, in 1970 she cooperate with Dance Orchestra Czechoslovak Radio and with Orchestra of Gustav Brom.
In 1971 she got Award Zlatá Bratislavská Lýra (Gold Bratislava Lyre). In 1974 she recorded album Nikola šuhaj loupežník with her brother Peter.
Hana is the woman with strong, lovely and very neat voice.

Javory
The band was established in 1974 by Peter and Hana Ulrych.

This entry was posted in Czech, Folk, Music Bands and tagged Hana a Peter Ulrychovi, J, Javory. Bookmark the permalink.